California mastodons have been in the news lately, so I decided to go with one of our Diamond Valley Lake mastodons for Fossil Friday this week.

The specimen shown above is a partially articulated skeleton from the East Dam of the lake, making it among our older mastodon skeletons (likely at least 35,000 years old). In the marked version below, vertebrae are highlighted in blue:

The anterior end of the skeleton is to the left. The anterior end of the thoracic region is still pretty well articulated (it’s possible this may include the last few cervical vertebrae, but confirming this will require closer examination). Further back, on the right, the skeleton becomes more scattered, and it appears a number of vertebrae are missing. The vertebra in the upper right corner is especially interesting; a closeup is below: 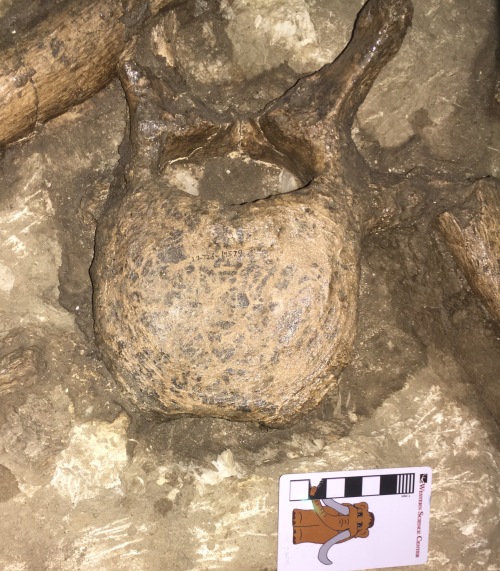 The rectangular vertebral centrum is typical of the posterior thoracic and lumbar vertebrae in mastodons, and is quite different from the centrum shape in mammoths (which are taller and more pointed at the bottom), confirming the identity of this specimen as a mastodon.

At least one of the ribs has notches along the margin that are consistent with marks caused by gnawing rodents: 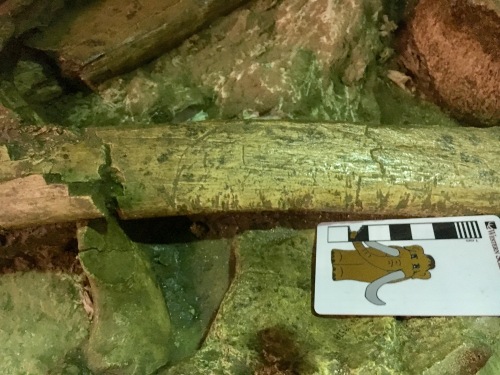 Of course, the big media news this week was a report (Holen et al. 2017) of a 130,000-year-old mastodon from San Diego that was supposedly worked by humans, more than 100,000 years before humans were thought to have arrived in North America. I have read the paper and I’m currently reading the supplemental material. The paper is quite detailed, and while I’m impressed with their arguments I remain unconvinced of their interpretation. While I feel the age is likely correct, I question their interpretation that the damage seen on the bones could only have been caused by humans; there needs to be a much better demonstration that human activity is the only reasonable explanation for their observations. Human teeth, cranial bones, jaws, vertebrae, and limb elements are all easily identified, yet no scrap of human bone has turned up even in areas with extensive collections such as Diamond Valley Lake, even in 30-40,000 year old sediments that are young enough to date using C14. For what i’s worth, while a few people have suggested otherwise, I see no eveidence of any human working of the Pleistocene bones from Diamond Valley Lake, and there’s no evidence of human habitation from the Valley during the Ice Age, even though there are extensive archaeological remains in the Valley that post-date the Ice Age.

This entry was posted in Fossil Friday, Mastodon. Bookmark the permalink.