At the end of this month WSC is opening a new exhibit, “Life in the Ancient Seas”. A big portion of the staff’s efforts are currently focused on getting this ready, including writing labels for individual specimens; this may be the largest exhibit we’ve ever done in terms of shear specimen count! But sometimes these labels can be difficult to write, as the information is often obscure.

This shell comes from Pliocene deposits near Chuckatuck, Virginia, specifically the Moore House Member of the Yorktown Formation. We have a small collection from this site at WSC, numbering perhaps 200-300 shells. Ten of them are from this species. This is a site I’m quite familiar with; I collected there numerous times when I worked at the Virginia Museum of Natural History, and in fact Brett collected this specimen on a field trip I ran there about 10 years ago. My first job at VMNH was sorting fossil mollusks from this and other localities, so while I’m not an expert on Pliocene mollusks I’m probably more familiar with them than is typical for a vertebrate paleontologist.

This shell had me stumped, though. At first I thought it was from the genus Striarca, like the example below from the Marine Life Encyclopedia: 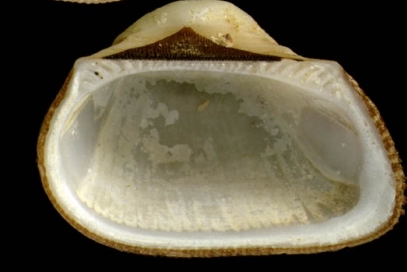 The problem was that none of the references I had at hand seemed to include a veneroid that matched both the size and appearance of this shell. Image searches online were not producing much of use, so I went to Twitter. Within a day or so I got a response:

Unfortunately searches for Pleiorytis centenaria didn’t turn up much. But then I received another Twitter response:

So that solved it! Asaphis is a veneroid, a member of a family known as the sunset clams. There’s even a photo online of Asaphis centenaria from the Pliocene Tamiami Formation of Florida:

So, mystery solved! And this allows us to display the particular specimen that I wanted to include in the exhibit: 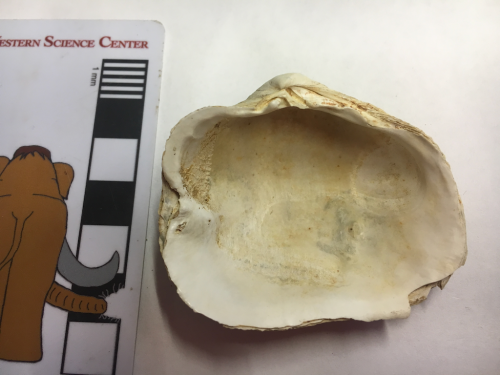 Notice the odd wrinkle on the left side of the shell. While Asaphis and other clams are sometimes misshapen because of where they happen to be growing, I don’t think that’s what happened here, because I’ve seen similar wrinkles in shells from mobile taxa, such as scallops. This looks like the clam suffered a non-fatal injury at some point. Perhaps a crab or some other predator tried to crack open the shell. The attack was unsuccessful, but it did some damage and the crab repaired the damage by depositing new shell layers over the injury as it grew. I love features like this, traces that give us glimpses into the daily lives of organisms that happened millions of years in the past.

Thanks to @afriendlywhit and @paleomollusk for their help with this identification. “Life in the Ancient Seas” opens to the public on August 31.

This entry was posted in Fossil Friday, Invertebrate fossils. Bookmark the permalink.