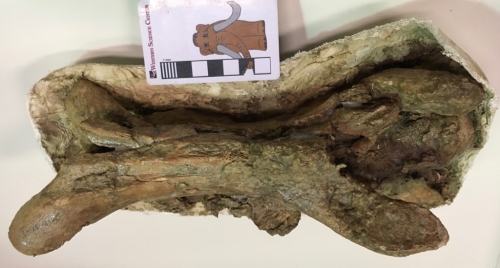 I’m endlessly fascinated by the strange skeleton of the western camel, Camelops hesternus. Camelops was a massive animal, and many of its bones were so large they can easily be mistaken for those from a bison. Yet other parts of the skeleton are almost delicate.

The long, slender bone shown above is a Camelops neck vertebra. Camelops had a long neck, but like almost all other mammals the neck had only seven vertebrae, so each vertebra had to be pretty elongate. (Most non-mammals with long necks have lots of shorter vertebrae, although there were exceptions.) The vertebra is shown in dorsal view (from above), and the front is to the right. The yoke-shaped structures at each end at the prezygopophyses (at the front) and the postzygopophyses (at the back), which articulated respectively with the zygopophyses of the preceding and following vertebrae.

Looking at the right side, the ball joint at the front of the vertebral centrum is visible on the right. This corresponded to a socket on the back of the preceding vertebra, but didn’t actually fit tightly into the socket as a large cartilage pad separated them in life. The large bony projection on the lower right is the right anteroventral costellar process. These processes provided attachment areas from some of the neck muscles, and are uniquely large in the camels.

This particular vertebra was collected in 1999 near the East Dam of Diamond Valley Lake, and is probably around 50,000 years old.

This entry was posted in Camels, Fossil Friday. Bookmark the permalink.